Lively conditions looked certain after our departure from Rothesay, timed around the departure of the ferry. However, as we reached the edge of Rothesay bay, the breeze had become light and very variable. Tystie had left first and was loitering, hoping for a photograph of the fleet together, but the boats were very spread out by the time the fleet reached the bottom of loch Striven. 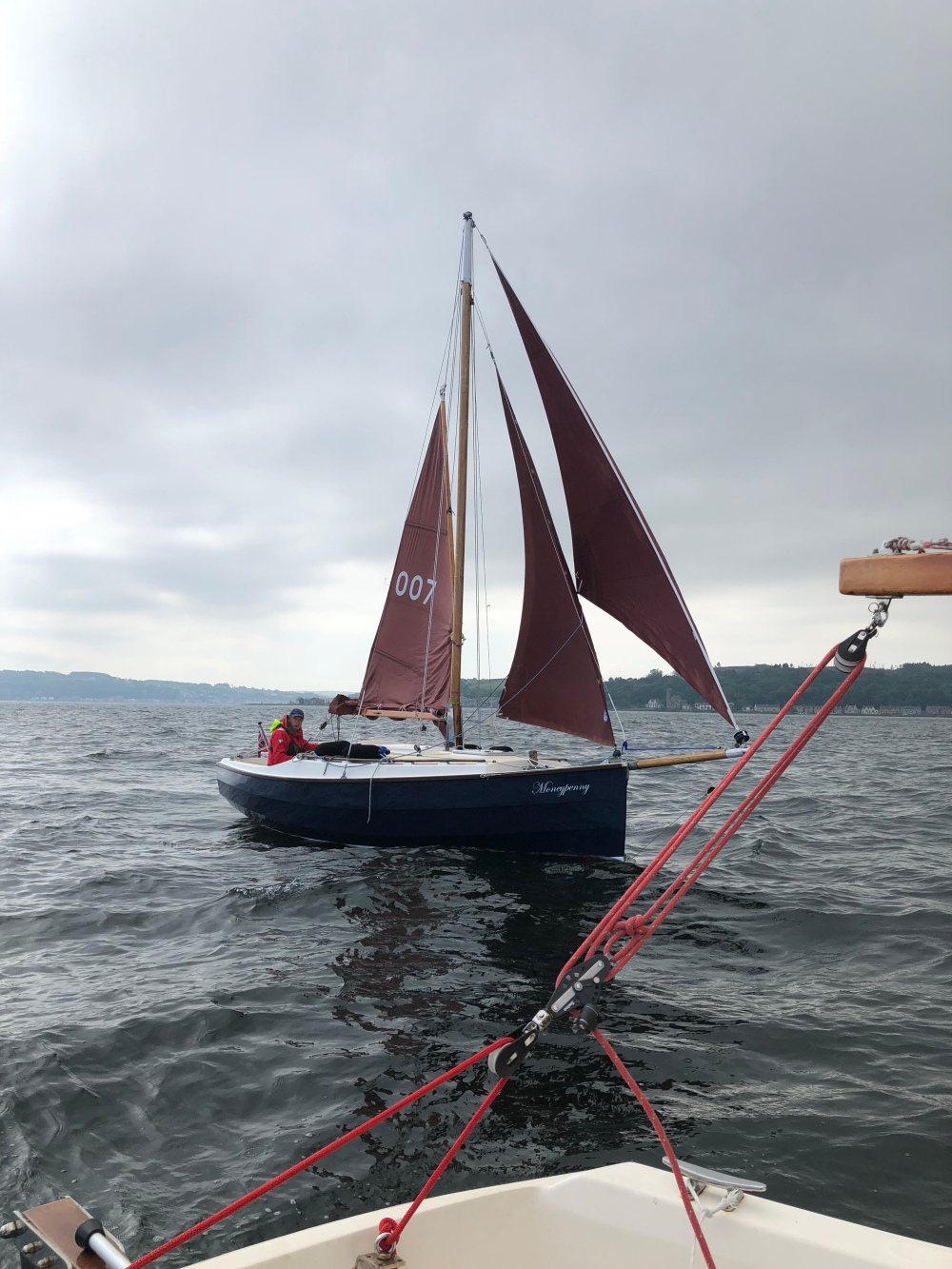 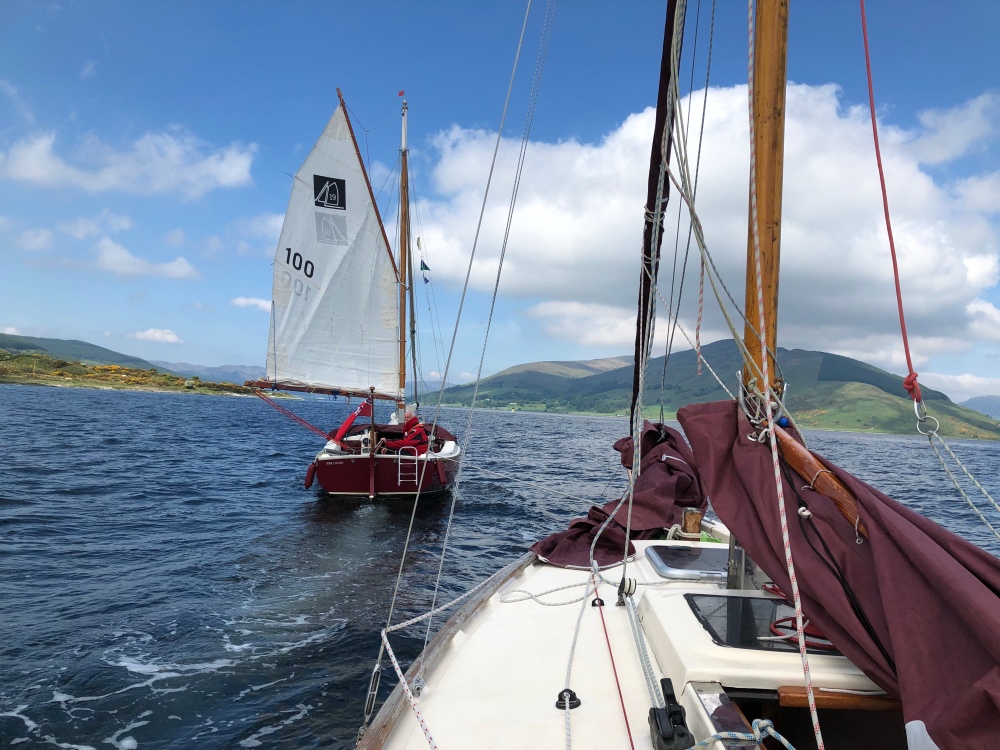 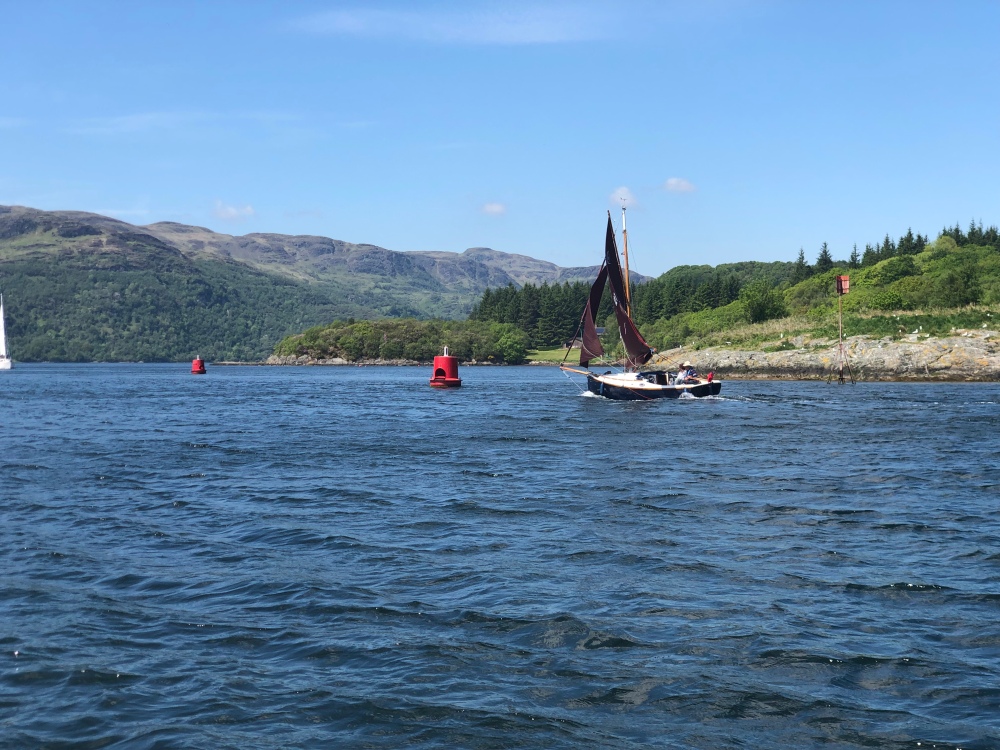 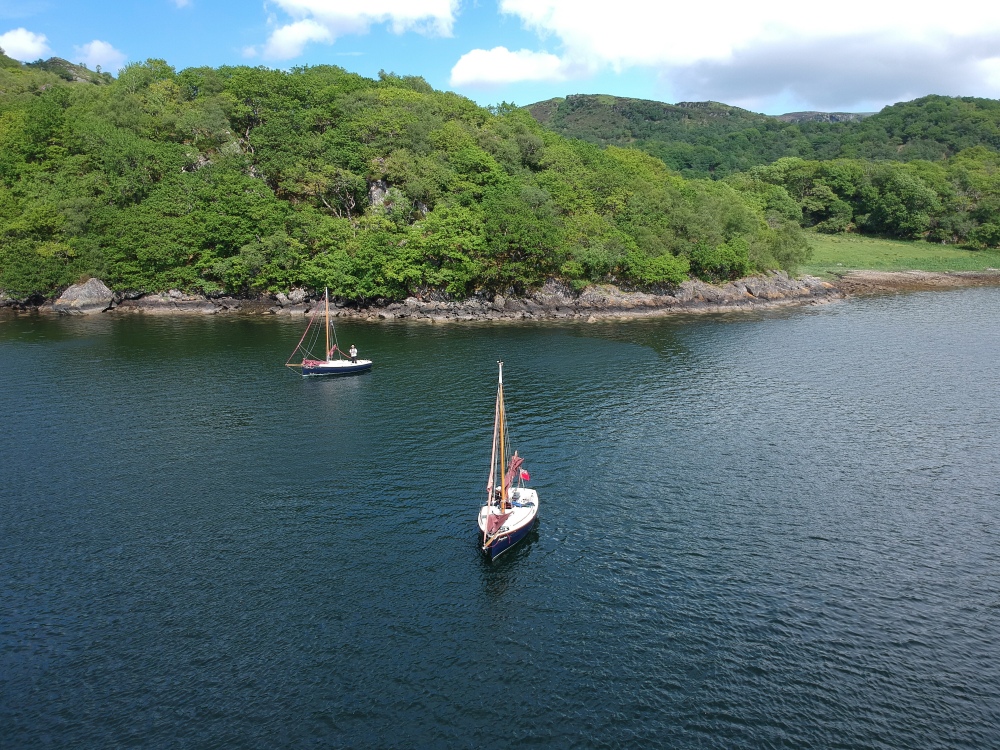 A naval ship making for the pier at the base of Striven had us all reaching for our pull cords. By the time we entered the East Kyle of Bute, the narrow winding strip of water separating Bute from the mainland, there was a steady breeze and we made good progress towards the narrows at the northern extreme of Bute.

The blustery conditions challenged a number of the fleet. Several boats had minor rigging issues to rectify, but Aurora suffered from an engine which would not re-start and Moneypenny experienced a snapped mast head. The break was above the hounds, so skipper Gary continued on staysail and engine, with neither main nor foresail now available.

Mary Ann and Irene came to Aurora’s aid, the former to provide a tow and the latter, astoundingly, to lend a spare outboard.

At the northern tip of Bute, the Burnt Isles separate the East Kyle from the West. Dodging the ferry and winding through the buoyed channel, the fleet emerged into very light airs. Some anchored in a peaceful bay, whilst most of the fleet explored Loch Riddon before heading south to our destination, the Kames Hotel just south of Tighnabruaich.

A strong wind provided an exciting run almost dead downwind to the moorings which were to be our overnight stop. Conditions were choppy as we arrived, but gradually the wind died away. Not all boats had a tender, so a certain amount of entertainment was had shuttling all the crews ashore.

Small tenders are easier to store in the restricted space inside a Cape Cutter, but those with larger tenders had a much easier row ashore. An outboard can be a mixed blessing for a small tender too, and Ladybird’s inflatable canoe seemed to fare best of all.

The sight of twelve Cape Cutters moored in the golden evening light made a splendid view during our well-earned dinner, before we returned to our boats by the light of the full moon.

Today was an exceptional day, hot and sunny, though with (in contrast to the previous two days) light winds. The plan was to sail up the Firth to Holy Loch for lunch and then back south to end at Rothesay on the Isle of Bute.

The fleet set out from Inverkip in ones and twos. Early departers discovered the winds were pretty much non existent at Holy Loch, so the plan was changed and we all ran south, turning past the light at Toward Point and rounding into Loch Striven. 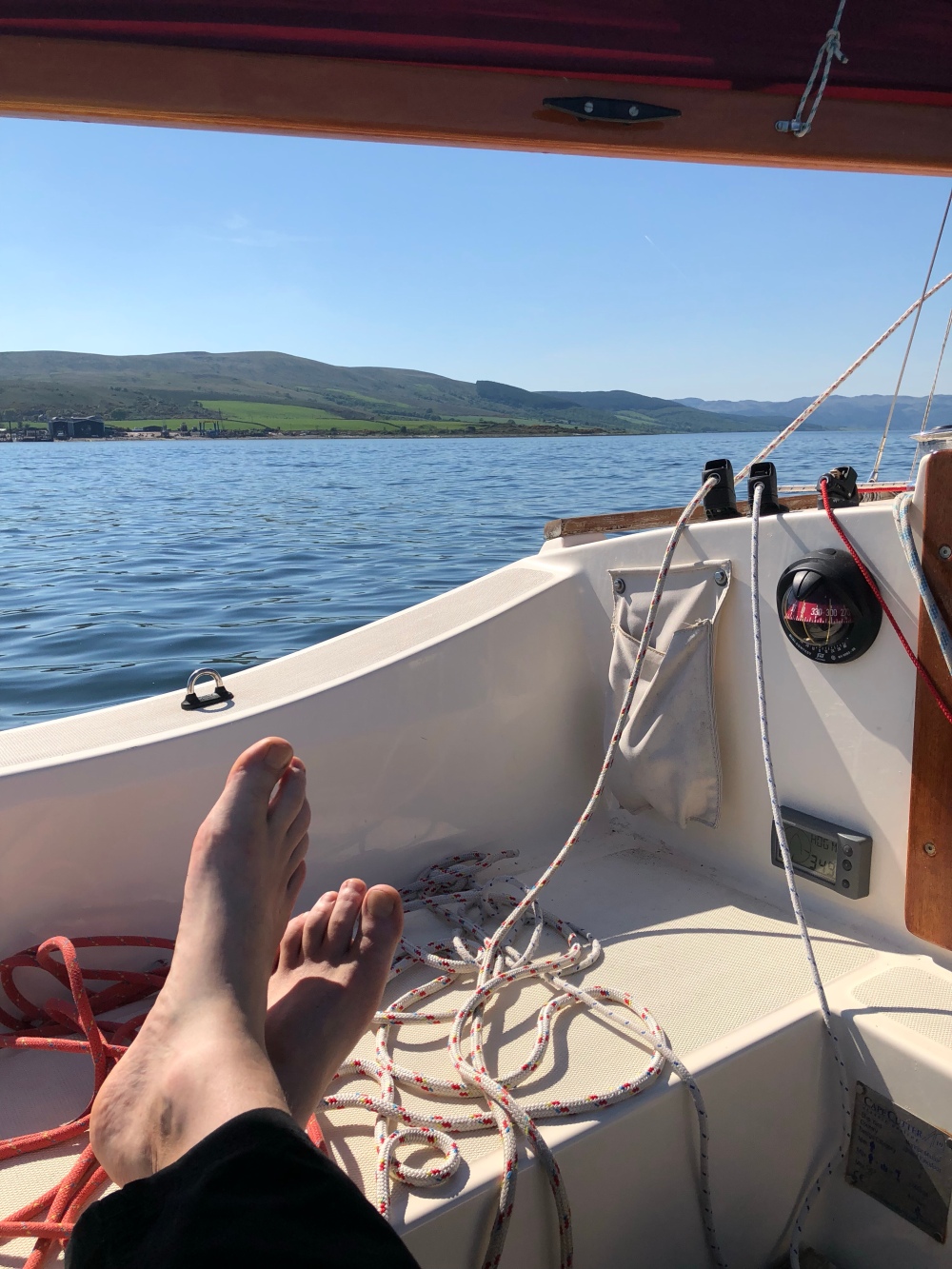 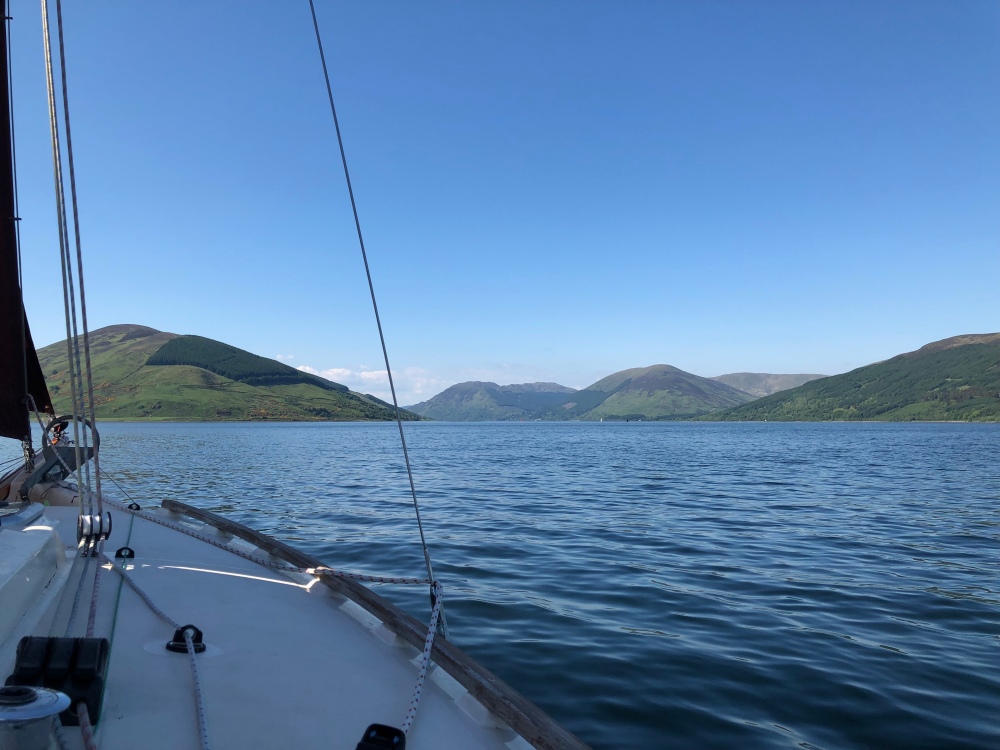 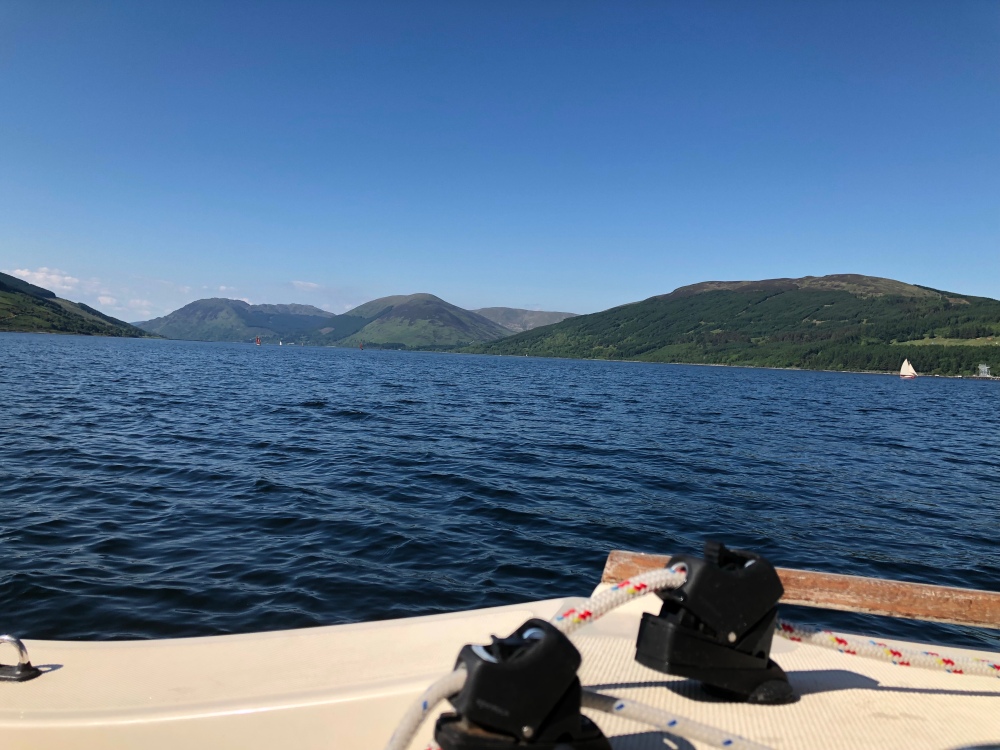 It was a day to have all the canvas up and the fleet made a lovely sight in the glorious sun. However, as the afternoon wore on, the winds became lighter and more variable, forcing our return to Rothesay. 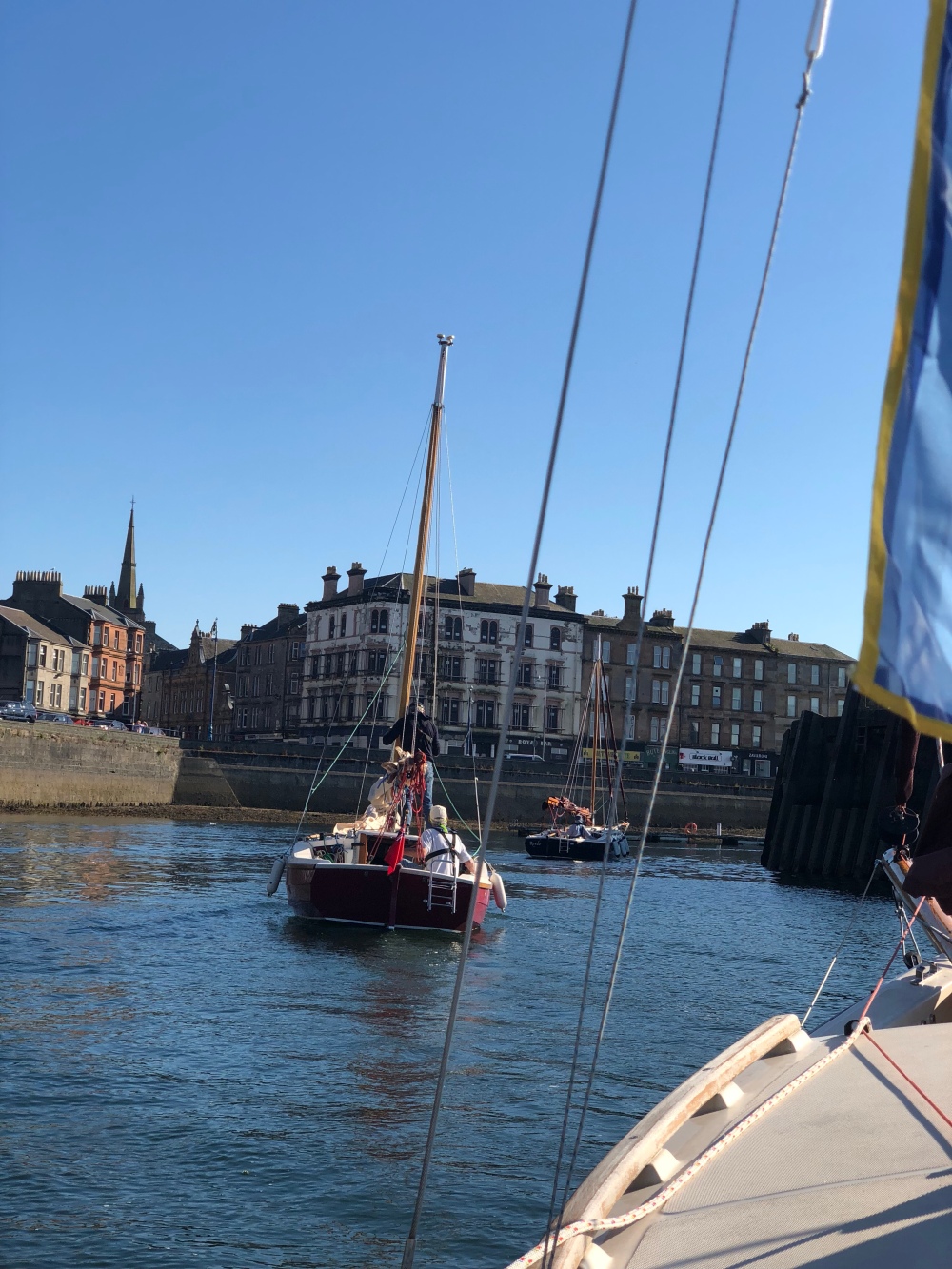 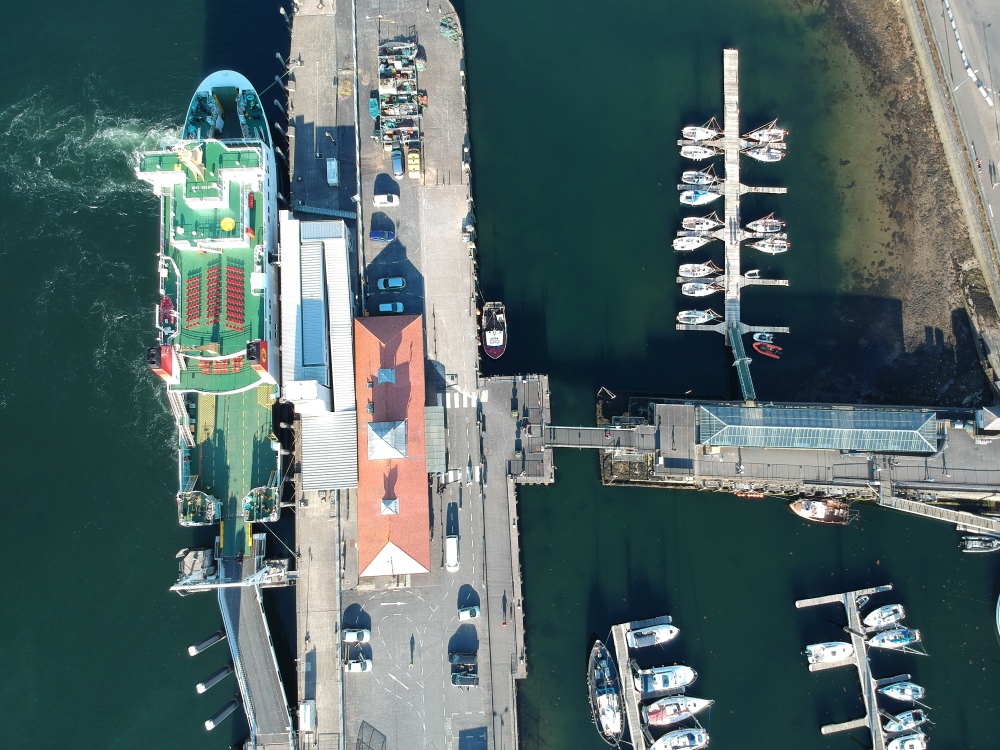 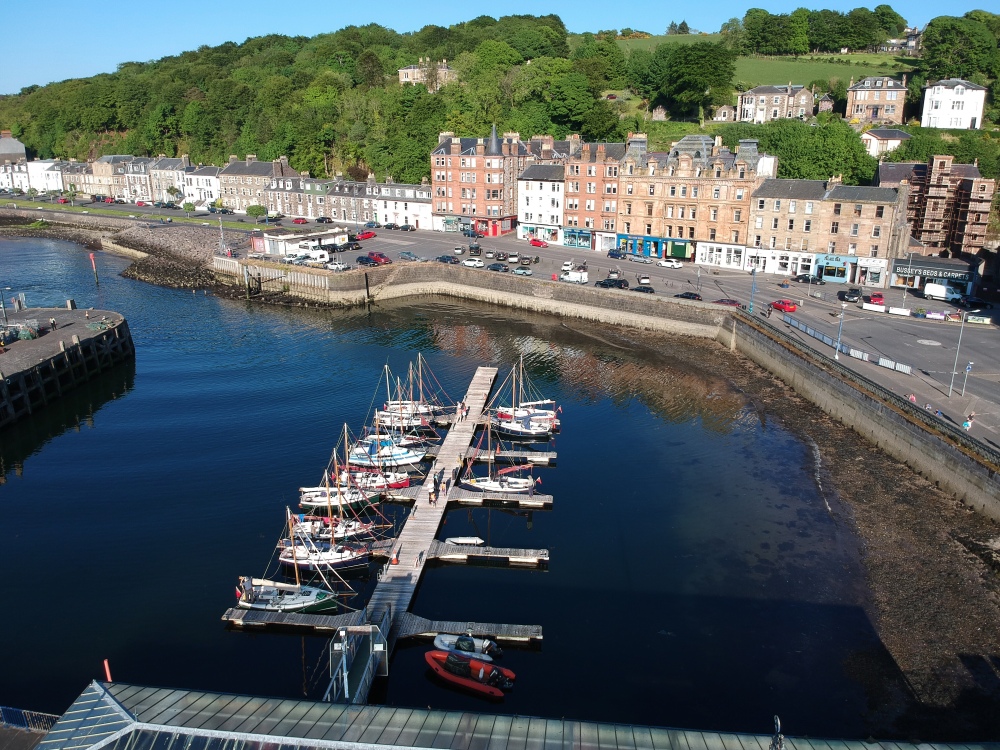 The harbour at Rothesay is small and welcoming. It is dominated on the outside by the ferry terminal and one must adhere to the traffic lights when entering and leaving.

Rothesay is a town of faded grandeur, with large confident Victorian buildings, many of which (like many seaside towns of old) have sadly fallen into disrepair. However civic pride remains and the gardens are marvellous with meticulously pruned fruit trees and lawns like a billiard table. A key tourist attraction is the Victorian Toilets- a marvellously ornate tiled affair.

Dining choices were limited and we had a comedy meal at the local Indian restaurant. It described itself as Rothesay’s premier Indian restaurant, but was in fact its only Indian restaurant. The waiter was very new, but no one had explained the concept of a restaurant to him. The food was good, but something of a lottery as to whether it was the dish ordered! 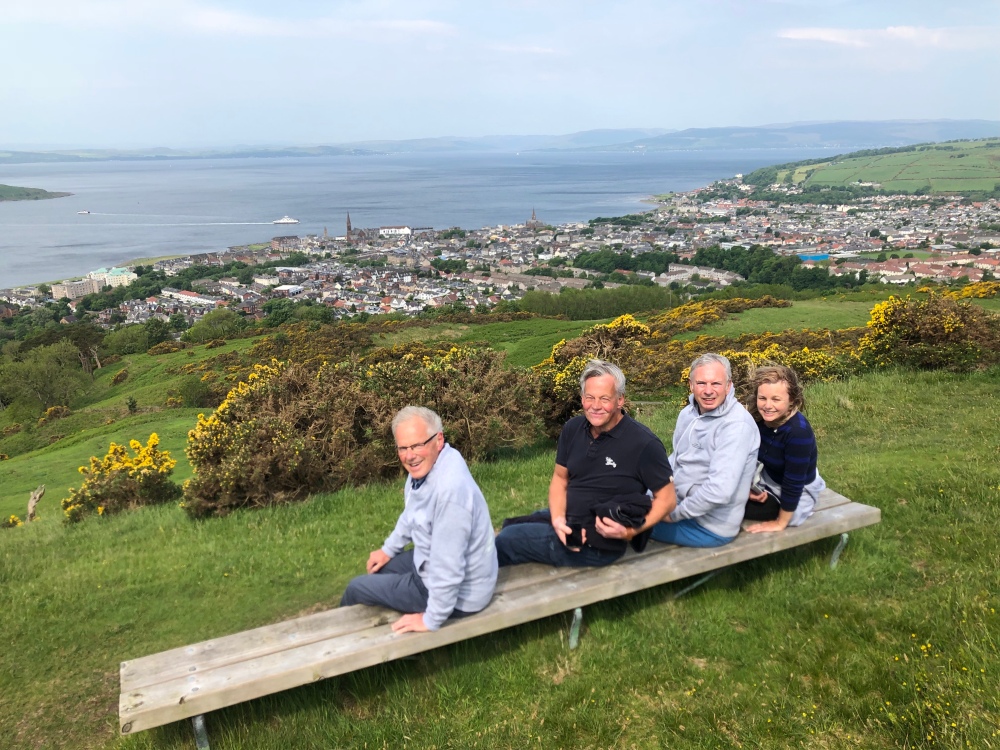 Today was a day of waiting, with a very gusty easterly hurtling down from the hills. The weather was otherwise lovely, so we climbed Castle Hill, to admire the view, which was indeed stunning.

The wind has been forecast to abate during the afternoon, but the gusts were still quite wild, although when the wind is in this direction, it’s much worse at Largs than the rest of that stretch of coast.

So it was a few boats set out north to Kip Marina, watched by those ashore. We could see that conditions were very choppy with big gusts just by the marina, but once the boats passed the town things calmed down considerably.

The rest of the party set out late in the afternoon on staysail and engine only, to arrive at Kip in light winds, followed by a lovely meal

in the Chart Room, overlooking the marina.

Saturday was arrival day at Largs Yacht Haven on the beautiful Firth of Clyde. We were treated to glorious sun as we rigged the boats and a team effort got 11 boats launched and on the pontoons in good time.

It’s great to see so many Cape Cutters travelling; I had brought Aurora just over 300 miles from the Midlands and there are several other boats from central England, but a number of boats had traveled much more impressive distances, notably Sapphire from Weymouth, Wadudu from Exmouth, Never Budge from Rosguill in Donegal. 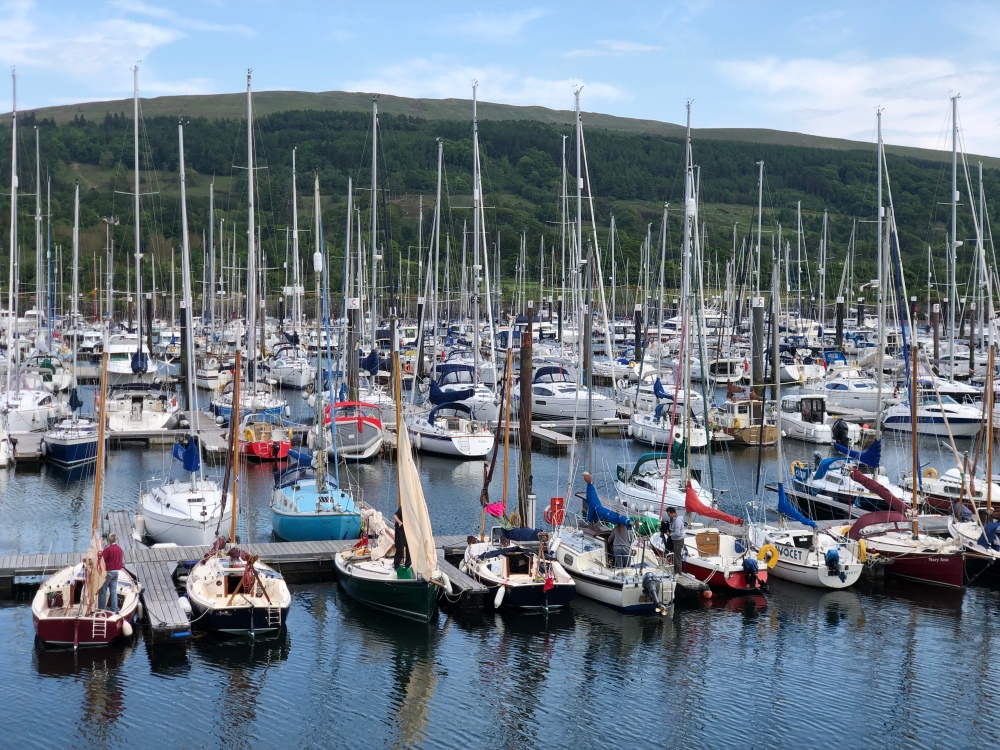 A very gusty F6/7 kept in the harbour in the afternoon, but there was plenty of boat fettling, making new acquaintances and renewing old ones to be done.

We spent a marvellous evening as guests of Largs Sailing Club in their smart clubhouse and watched the most amazing sunset as we ate our meal. Gary and Malcolm opened the formal proceedings and we were briefed for tomorrow. 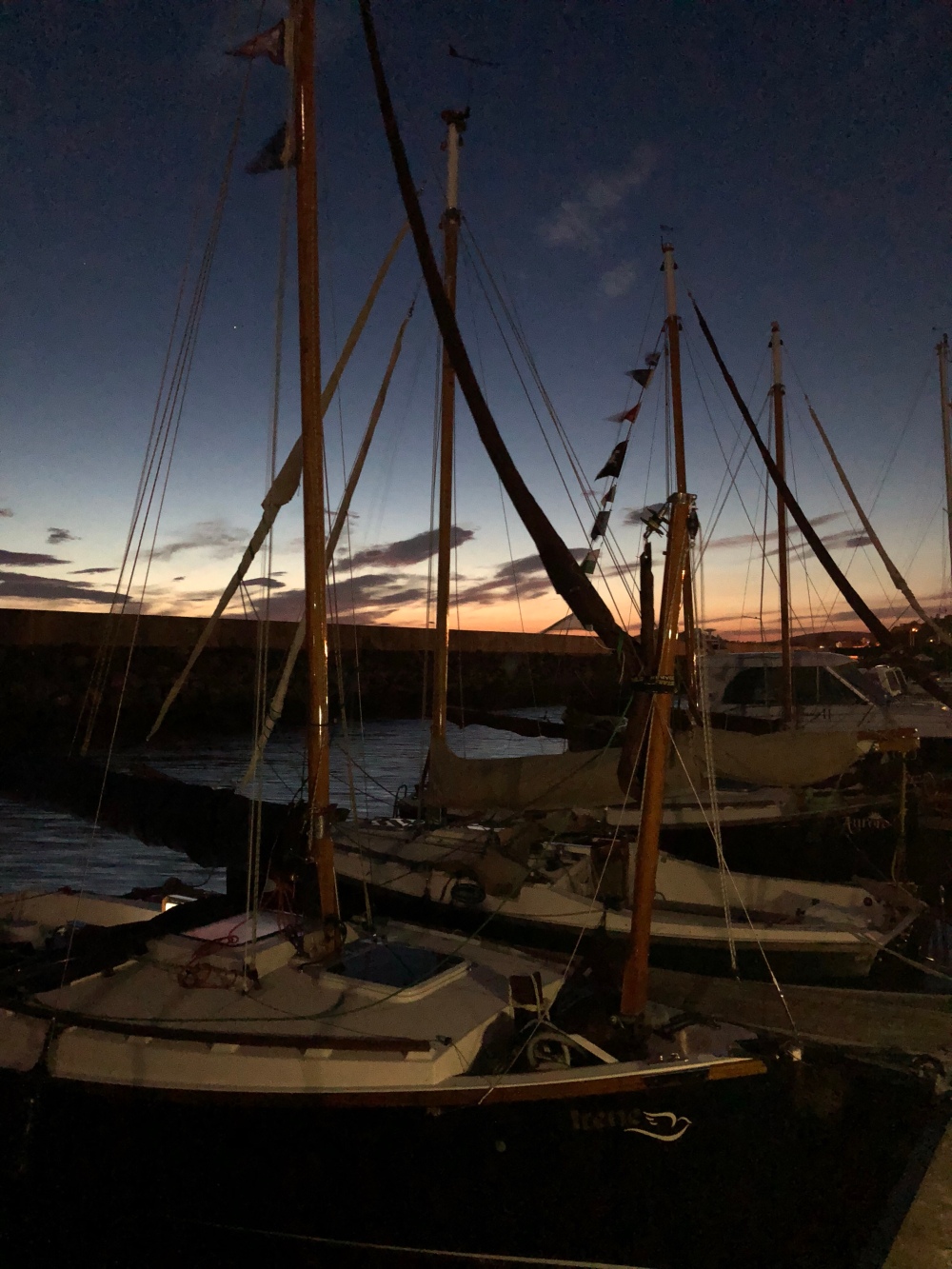 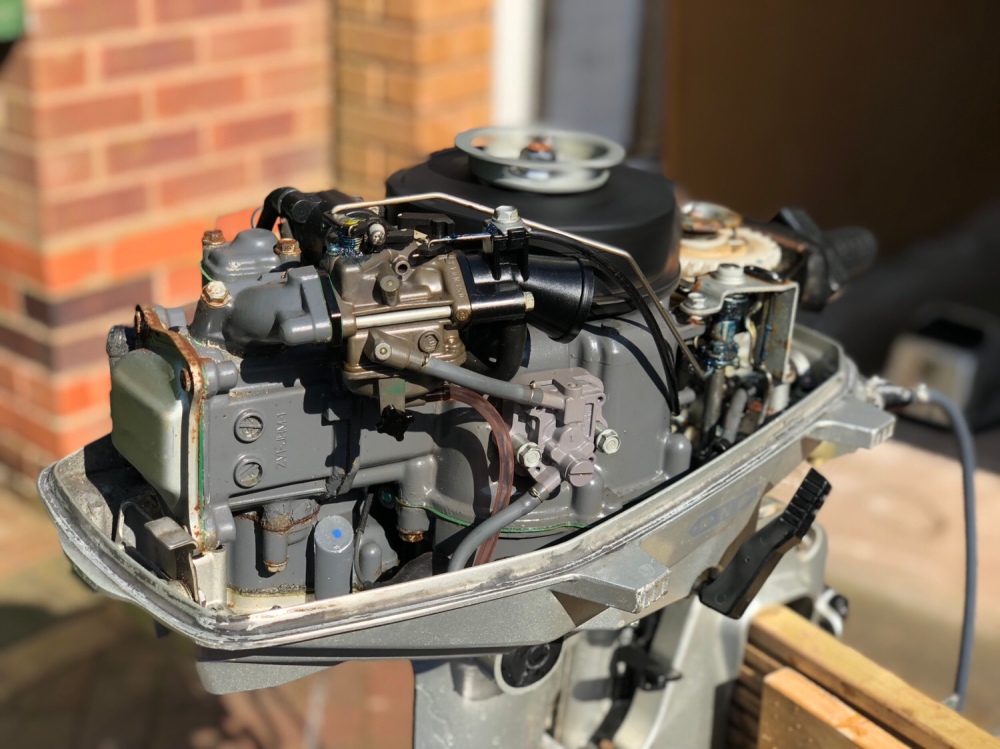 An outboard engine is a necessary evil on Aurora and I hate running it for any length of time, partly due to the vibration it causes in the cockpit. In addition to this, despite being made from a sturdy piece of Iroko, I know of two Cape Cutters where the outboard bracket has split along the grain. To this end, when I noticed my outboard bracket and it’s stainless mount needed some TLC at the end of last season, I decided to fabricate an improved one over the winter.

The concept was to make a laminated bracket and add bushes to give improved damping. Like many of my mods on Aurora, they are based on ideas I’ve seen in other boats, and this was no exception- Cape Cutter “Ladybird”, sports just such a bracket. 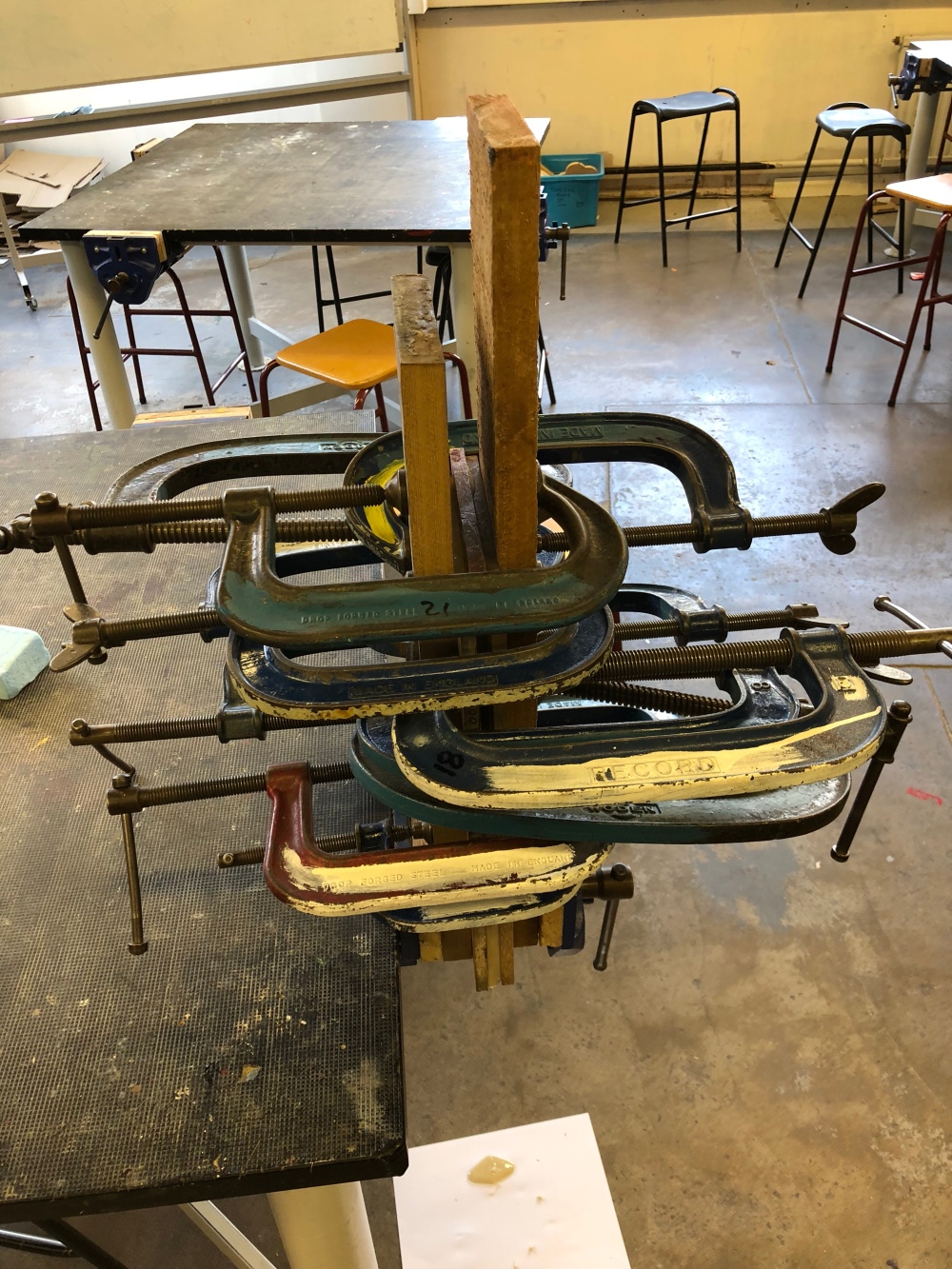 I had access to some teak in the form of an old lab bench from work. This had a few millimetres planed off to give a good surface for bonding. Three oversize pieces were then clamped with crossing grain and glued with cascamite.

Once cured, the laminate was cut to size and some holes countersunk to receive bushes on each side. I gave the bracket half a dozen coats of varnish and left it for a month to harden before clamping it in place on the stainless bracket (which had also needed a weld repairing). 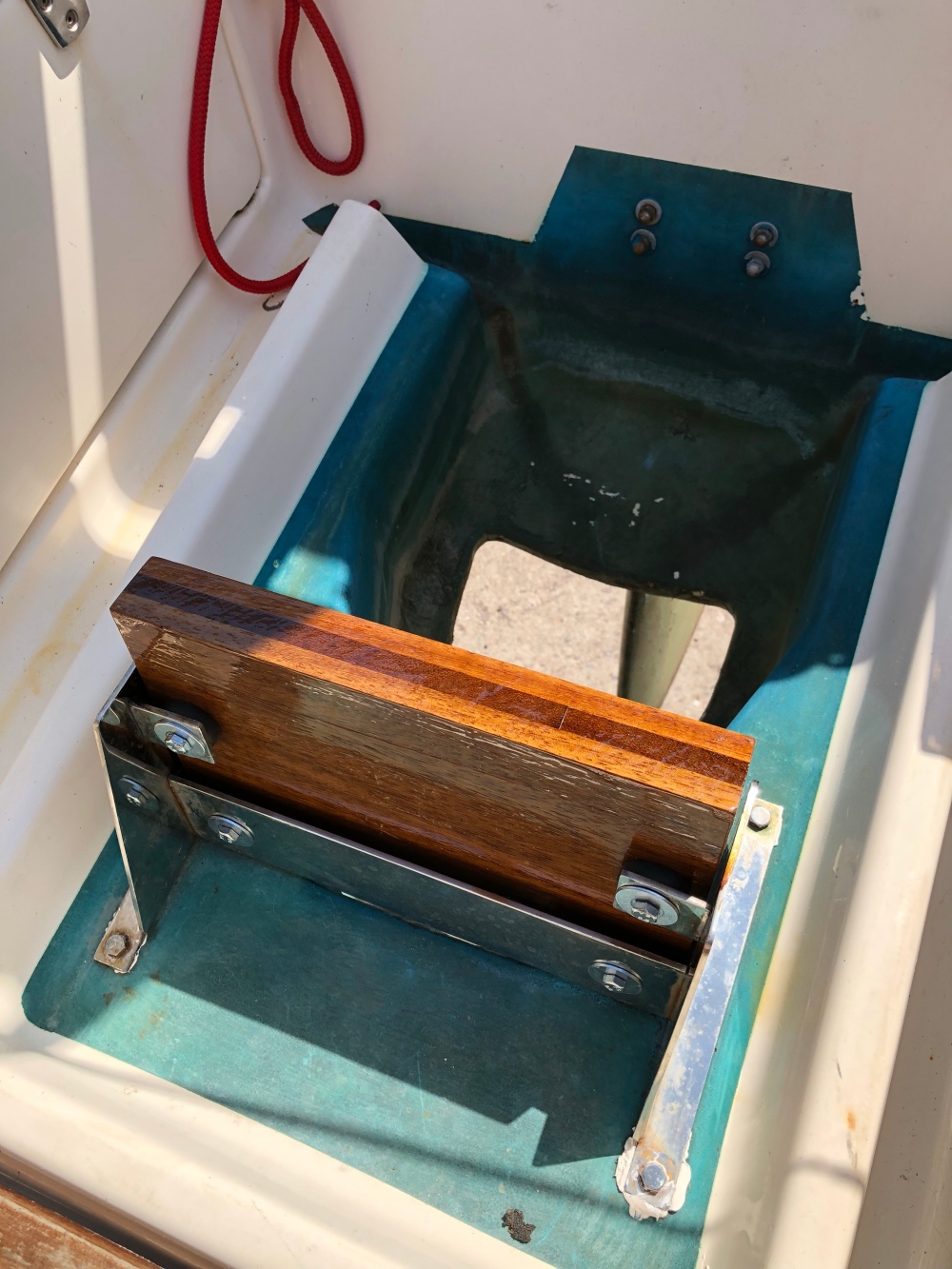 Henry Honda has also received some pre-season attention, in the form of some lubing and an oil change (mental note: perform lubing in autumn before winter storage).